The 5 Economic Factors Every CRE Investor Should Watch 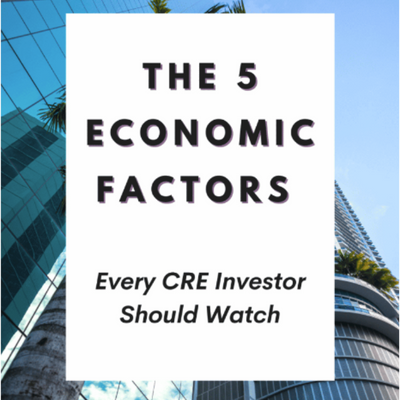 Earlier this year, I was in Denver, CO, for Instructor Training with the CCIM Institute. While there, we heard a presentation from Dr. Glenn Mueller, Ph.D. with the Franklin L. Burns School of Real Estate at the University of Denver. The main focus of his presentation to us was on the commercial real estate market cycle. Still, he led off by talking about the five key macroeconomic factors every CRE professional should be watching. I’ve been glued to them ever since. You should be too!

People use real estate – whether it is multi-family, industrial or anything in between. Without people, you don’t need any kind of commercial real estate. So when you hear people talking about demand for real estate, that is driven by people, or more often, by jobs. Here are the three demand metrics to watch.

United States population growth averaged .7% annually from 2010 to 2022, which amounts to around 3 million new people annually. From 2022 to 2027, that percentage is forecasted to be .57% or about 2 million people. Regardless of whether those people come from new births or immigration (most come from immigration), they will create demand for space.

What are 2 million people a year for the next five years? That is another Nashville, Indianapolis, or Cleveland. Another 2 million people are in Louisville, plus Little Rock. We need housing, retail space, office space, etc., for that many new people every year.

Keep in mind this is a very macro metric. Your market might not get any of this population growth, but overall, the United States needs to build a new Nashville every year for the next five years. People use space. If you want to download an Executive Summary of the US Demographic Data – CLICK HERE.

The simple definition of GDP is the total of all goods and services created within the borders of a country – generally in a given year. So, all the stuff we make in a given year. When GDP is growing, the economy is growing, and there will be more demand for commercial real estate. Here is a chart of GDP growth since the beginning of 2020.

You can see that when COVID hit, GDP declined by over 8% compared to the previous year. Our experience mirrors that rapid decline. We stayed home. We didn’t spend. Many lost jobs. Demand for space decreased, but only for a short time.

Then the federal government flooded the economy with capital and people started spending again. We got back to some semblance of normal. Demand for commercial real estate sky-rocketed for a time (except for office space in the big cities). Most commercial real estate brokerage companies have had very good years in 2021 and the first half of 2022.

If GDP growth is strong, there will be an overall increase in demand for commercial real estate. But remember, this is a macro metric. Your market might not be affected.

Employment growth is the first metric I look at when I look at a market. But on a macro scale, overall US employment growth is a direct indicator of increased demand for commercial real estate and is tied to GDP growth. If more people are working, they need more space to do their work. And if more people are working, more products are services are produced, which increased GDP.

As I write this, I am 45 years old. It has been 40 years since the US economy has dealt with inflation like we are seeing now. I’ve heard my dad tell stories about being happy with 13% interest rates, but I’ve never experienced the effects of inflation – not like this. And we all feel it. Our disposable income does not have the purchasing power it did even 12 months ago. This is what happens when the federal government dumps trillions of dollars into the economy in reaction to the pandemic. Now the Federal Reserve is stating that they are committed to reducing inflation to 2% a year – and they are going to raise rates until they get there.

What I’m seeing is that deals are dying because buyers put properties under contract but by the time it is time to close, interest rates have made the financing too expensive. I’m starting to see regional banks stop lending on commercial real estate because the Federal Reserve is saying these loans are inflationary.

In the chart above, you can see a small dip in the most recent quarter. Many economists are attributing this to the decrease in gas prices because the federal government tapped into the Strategic Petroleum Reserve. Once the election is over and this half-measure expires, what do you think the gas prices are going to do? Go back up? That’s what I think as well.

The 10-Year Treasury is the most watched and talked about government security. According to Forbes.com, “Investors pay keen attention to movements in 10-year notes because they serve as a benchmark for other borrowing rates, such as mortgage rates.” So, in other words, when the 10 Year Treasury goes up, so do 15- and 30-year mortgage rates. Commercial loans don’t follow the 10 Year as directly, but it definitely plays a roll.

The 10-Year Treasury interest rate is also significant because this rate impacts the rate at which companies can borrow money. So as this rate increases, it becomes more expensive for companies to borrow money which can lead them to pull back on growth projects. Less growth equates to less GDP…and, ultimately, less demand for commercial real estate.

You can see that historically, we are still at low rates.

But since rates were cut to nearly zero during COVID, there has been a rapid increase. The cost to borrow, as a result, has become much more expensive. This expense will put downward pressure on price. Sellers are going to be forced to keep their assets or adjust their pricing expectations. This will create more of a bid/ask gap, making negotiations more challenging.

At the Barron Commercial Group, we believe there are opportunities in any market during any market cycle. Many of my clients are excited about the opportunities that will present themselves to investors with cash in the next 12-24 months. Underwriting and financial analysis of deals will become even more critical. If you would like to discuss how you could take advantage of the changes coming in the market, click the button below, and let’s schedule a call. We’d love to talk with you.

Copyright © 2023 Barron Commercial, All rights reserved. Designed by Be Eminent.