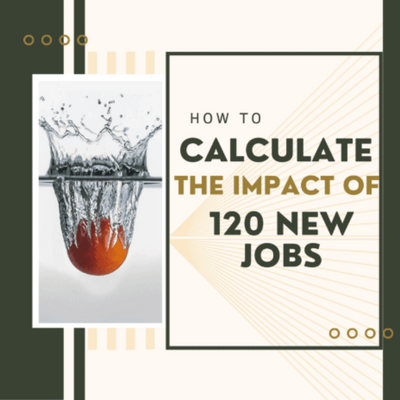 About a month ago, Brittaney Johnson resigned as President and CEO of the Greater Owensboro Economic Development Corp. She is leaving to take a position as director of economic development for Big Rivers Electric Corp.

Interestingly, Brittaney was instrumental in bringing Big Rivers from Henderson to Owensboro…along with 120 jobs.

As an instructor for the CCIM Institute, I teach Market Analysis. In that course, we teach our students how to apply the principles of Economic Base Analysis. Now before your eyes gloss over, let’s take this actual job announcement and quantify the increase in demand for space that Big Rivers is bringing to Owensboro.

There are two types of jobs – basic and non-basic. Basic jobs are poorly named. When I think of basic, I think of the basic (lowest) trim package on an F150. When we are talking about jobs, basic jobs are the better of the two. Basic jobs create a good or service that is exported outside of the local market. In return, new dollar bills enter the local market. Non-basic jobs do not bring new dollars into a market but instead, circulate the dollars that are already here.

For example – I’m a non-basic job. Almost all of my commercial real estate business is local. When I provide a service and earn a fee, the dollars I’m paid are already in Owensboro. And I have to pay taxes, and I’ll put some in savings – so that the circulated amount of local dollars continually decreases. That’s why we need new dollar bills.

Basic jobs are jobs like manufacturing, farming, and some education. The 5,000 new jobs that Ford is putting in Elizabethtown are almost all basic jobs. They will be making batteries for electric vehicles. Those batteries will be made in Etown and exported all over the place in these new vehicles. That is a basic job.

In Economic Base Analysis, we call this the Economic Base Multiplier (EBM). Every market has a specific EBM, and I’m going to spare you the statistical analysis. Owensboro’s is about 5. That means every basic job throws off 4 non-basic jobs. 1 basic + 4 non-basic = an EBM of 5.

So when you do the math, Big Rivers brings 120 basic jobs to Owensboro that will generate 480 non-basic jobs. Their total impact on the job market in Owensboro will be 600 new jobs. Pretty exciting!

Jobs don’t shop. Jobs don’t create wills and eat out at restaurants. Jobs don’t get their hair cut. People do. And people use space. So when you want to know the demand impact of a new job announcement, you need to convert new jobs into a number of people. In Economic Base Analysis, we call this the Population to Employment Ratio (PER). As of 2022, there are 104,416 people in Daviess County, KY. There are 50,218 employees. Do the math, and the PER for Daviess County, KY, is 2.08.

To convert those 600 new jobs into people who use space, you simply multiply 600 by the PER of 2.08, which gives us an additional population of 1,248 people…because of the 120 basic jobs from Big Rivers.

Let’s talk about housing units first. These 1,248 people are going to need to live somewhere. Does Owensboro have enough housing units to handle the new demand? Good question. Let’s calculate demand and see.

If I’m an apartment developer or investor, I can count on 30% of those 510 new households – or 153 of them – needing to rent. I hope someone is going to build them because we don’t have that many vacant rentals in Owensboro right now.

Now add in the dynamic that interest rates have doubled over the last year, and you can expect more than 30% of these household becoming renters instead of buyers.

But if you are a home builder or a realtor, then you consider the 64% of people who would prefer to own versus rent. 510 households x 64% will create demand for about 325 new homes. I’m not sure how many homes are on the market for sale right now, but it is less than 325.

What about retail? Retailers measure demand based on disposable income. I’m going to oversimplify, but consider this. The average household income in Daviess County in 2022 is $55,904. With 510 new households coming to Owensboro because of Big Rivers, that is over $28 million a year of spending potential that Owensboro didn’t have before. Retailers, landlords, and developers like hearing that.

And then there is self-storage. In the Owensboro area, there is 8.72 square feet of self-storage for ever person who lives here. With 1,248 new people on the way, that means an increased demand of almost 11,000 square feet.

When you look at office space, it is a little more complicated. You only consider jobs, and then you have to factor in the industry sectors that use office space (mainly professionals like CPAs, financial planners, attorneys, doctors, etc.) and weed out the rest.

So what kind of impact can 120 new basic jobs from Big Rivers mean to Owensboro? 325 new houses need. 153 apartments. Enough retail to take advantage of $28 million in new dollars in the market. 11,000 square feet of self-storage is needed. And that doesn’t include increased demand for office and industrial space. Those 120 new jobs are a very big deal for Owensboro!

Thanks Brittaney! The Barron Commercial Group wishes you the best!

If you would like to take advantage of some of this new demand, we’d love to talk with you. You can schedule a call by clicking the button below.

Copyright © 2023 Barron Commercial, All rights reserved. Designed by Be Eminent.